Skip to content
Millions of copies of the “Keep Calm and Carry On” poster were printed on the eve of World War II, but never displayed. Now the message has taken on a new lease of life in our troubled peacetime. 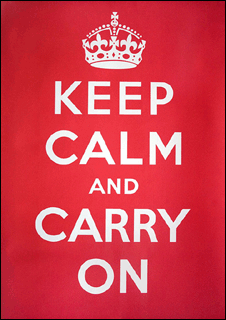 The simple five-word message is the very model of British restraint and stiff upper lip.
Keep calm and carry on.
In 1939, with war against Germany looming, the Government designed three posters to steady the public’s resolve and maintain morale. These featured the crown of King George VI set against a bold red background, and three distinctive slogans – “Freedom is in Peril“, “Your Courage, Your Cheerfulness, Your Resolution Will Bring Us Victory”, and “Keep Calm and Carry On”.
Two-and-a-half million copies of “Keep Calm” were printed, to be distributed in the event of a national catastrophe, but remained in storage throughout the war.
The message was all but forgotten until 2000, when a copy was discovered in a box of books bought
at auction by Stuart Manley,a bookseller from Northumberland.
To date there are numerous variation’s of this slogan, I like this one; 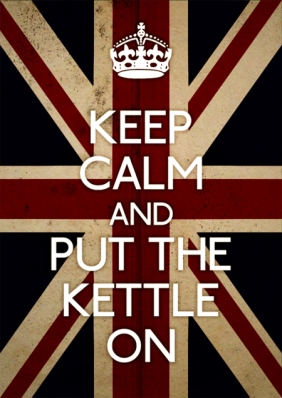